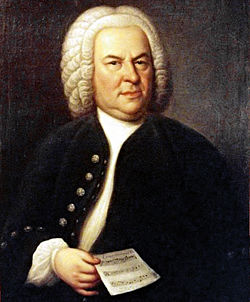 Johann Sebastian Bach (21 March 1685, O.S.31 March 1685, N.S.28 July 1750, N.S.) was a German composer, organist, harpsichordist, violist, and violinist whose sacred and secular works for choir, orchestra, and solo instruments drew together the strands of the Baroque period and brought it to its ultimate maturity. Although he did not introduce new forms, he enriched the prevailing German style with a robust contrapuntal technique, an unrivalled control of harmonic and motivic organisation, and the adaptation of rhythms, forms and textures from abroad, particularly from Italy and France.

Revered for their intellectual depth, technical command and artistic beauty, Bach's works include the Brandenburg Concertos, the Goldberg Variations, the Partitas, The Well-Tempered Clavier, the Mass in B minor, the St Matthew Passion, the St John Passion, the Magnificat, the Musical Offering, The Art of Fugue, the English and French Suites, the Sonatas and Partitas for solo violin, the Cello Suites, more than 200 surviving cantatas, and a similar number of organ works, including the famous Toccata and Fugue in D minor and Passacaglia and Fugue in C minor, and the Great Eighteen Chorale Preludes and Organ Mass.

Bach's abilities as an organist were highly respected throughout Europe during his lifetime, although he was not widely recognised as a great composer until a revival of interest and performances of his music in the first half of the 19th century. He is now generally regarded as one of the main composers of the Baroque style, and as one of the greatest composers of all time.

Wilhelm Friedemann Bach (1710 1784) was the eldest of the Bach sons, and apparently his father's favourite. He received extensive training from his father and at least one other exceptional musician, eg Graun on the violin, when Bach removed Friedemann for one year to study the instrument. Generally considered the most brilliant of the Bach sons, Friedemann held two posts in Dresden and Halle, but never acquired a position which really augmented his skills or allowed him the freedom he craved. After abandoning his post as organist and director of church music in Halle in 1764 he moved around Germany and maybe even as far as Russia and England, supporting himself by teaching, giving recitals and, unfortunately, selling the manuscripts he inherited from JS Bach.

Recognised as the last of the great organists, whose epic era ended when he left Halle, Friedemann was one of the most original, independent and exceptionally talented musicians of all time. However, it seems that he would influence history more with his improvisations rather than as composer, despite his genial counterpoint and originality; apparently he was a greater organist than Sebastian Bach. He was unwilling to compromise in his output and refused to entertain current tastes as much as his younger siblings. His music suffered in his day because no one else could perform it and was seen as eccentric. He seems to have maintained a following however, of connoisseurs.
The last phase of his life ended in Berlin, where he for a time stayed with the princess Anna Amalia. When he tried to have her replace her court composer with himself, his relationship with her was corrupted. He finally died in penury. He was said to have a 'dark' character and was always seen as eccentric. However, modern analysis is moving toward the conclusion that Friedemann and his music is one of the most essential figures in the transition from Baroque to Classical. His music may be summed up as 'visionary products of genius'! His life has fascinated scholars and has been the subject of various (fictional) accounts in books and films. Just as Nietzsche said of Beethoven, that his music is music about music, so too is this true of Friedemann. The princess Anna Amalia described him as “the one existing composer who will serve as a model for all ages.

Carl Philipp Emanuel Bach (1714 1788) was the second, most prolific and successful of the Bach sons. Equally revered as a keyboardist, Emanuel was employed by Frederick II of Prussia ("Frederick the Great"). More famous than his father in their lifetime, this Bach was lauded by all and Mozart said of him: "He is the father, we are the children." His style, which he claimed should always move the listener and the composer as well, was a pleasing mix of Rococo and Baroque. His fame rested mainly on his keyboard sonatas, which mark an important epoch in the history of musical form. Lucid in style, delicate and tender in _expression, they are even more notable for the freedom and variety of their structural design. He influenced Haydn, Mozart and Beethoven. However, he was not free to compose as he always wished and was strictly controlled by the court. He held positions all over Germany, the final one in Hamburg where he died, and wrote an influential treatise on playing the keyboard.

Johann Christoph Friedrich Bach (1732 1795), known as the Buckeburg Bach, as he worked at the Court of Buckeburg where he was employed by Count Wilhelm, where he is said to have worked 'quietly but happily'. The count's predilection for Italian music spurred Bach to adapt his style accordingly, but he retained stylistic traits of the music of his father and of his brothers. "He was an industrious composer, ... whose work reflects no discredit on the family name." His music is more akin to Mozart's than any other Bach.

Johann Christian Bach (1735 1782) was known as the English Bach because he held a long standing position in England. He also spent a considerable amount of time in Italy. The music of JC Bach is notably different from the preceding Bach brothers despite each sibling having a unique voice - because as he was only 15 when his father died, his influence seems to have been less. Johann Christian's highly melodic style differentiates his works from those of his family. He composed in the galant style incorporating balanced phrases, emphasis on melody and accompaniment, without too much contrapuntal complexity.